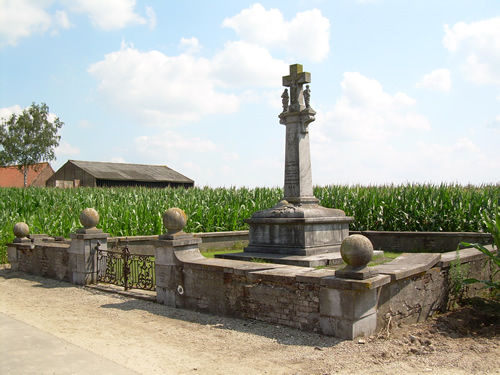 A Breton cavalry cross reminds us of adjutant Charles Dresse.
On a high column stands a cross with Christ and on both sides Mary and John.

A Breton Calvary is placed inside a cemented fence wall covered with bluestone slabs forming the square seal.
On the stone pegs next to the decorated iron fence are two hard stone balls, as well as on the four corners.
On a pedestal with triple articulation there is a high column, on which a cross is placed with the image of Christ, with images of Mary and John on consoles to the left and right of it. 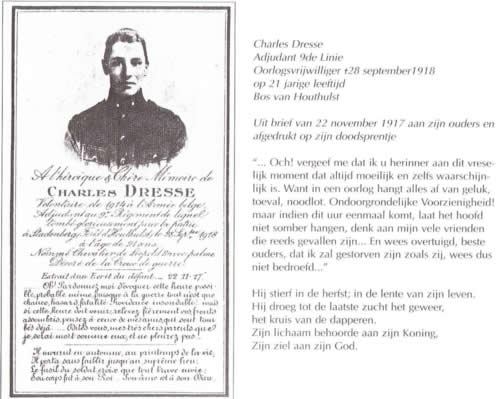 Het 9de Linie:
This regiment, the right wing of the division, followed from Ruissea farm the northern verge of the railway leper-Kortemark and crossed the road Langemark-Bikschote. The north of Langemark village was quickly eclipsed. Then the 9th line popped into the flooded valley of the Broenbeek. 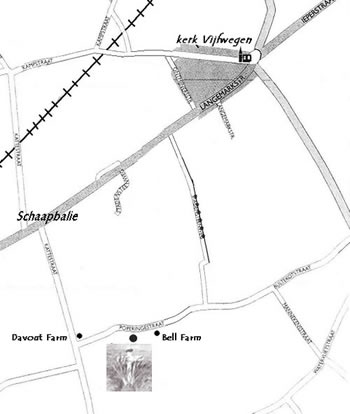 Saxon reinforcement overwhelmed:
There was no question of serious German resistance either, notwithstanding the 23rd (Saxon) ID just as reinforcement had arrived. Her battalions, who had just come from France and had suffered great losses there, were however barely a few companies strong. They also arrived too late, so they had not even taken half of their position. Around Veldhoek-Madonna the 9th Line also took dozens of prisoners from the regiments 100 and 108 of the 23rd SID. The 9th progressed so fast that it was already past objective at half past nine. 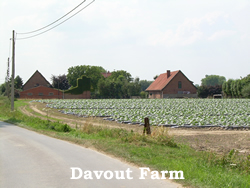 Vijfwegen: German counterattack.
The 9th Line had already occupied the walled farm Ferme Rembrandt ("Ter Storme") and had crossed the road Vijfwegen-Westrozebeke, when it was felt that nobody had kept pace on the left and right and that it had ended up in a dangerous spearhead.
The bottom now rose quickly from 20 m to 50 m over a distance of only 2 km! At that height between Stadenberg and Westrozebeke, the Germans were lurking behind their machine guns. They also noticed the precarious situation in which the Belgian 9th Line were located to make use of it. At 10 o'clock, Bavaria and Saxony passed to coordinated flank attacks, from the hem of the Houthulstwoud and from Vijfwegen. The losses at the surprised 9th Line were immediately enormous. Numerous officers fell. The command had to be taken over by lower grades and even soldiers. A careful and slow backward maneuvering was recommended. Even more because the promised French aid still did not show up. The 9th retreated a mile and a half to the Ferme Davout on the Poelkapelle-Vijfwegen road. Adjutant Charles Dresse keeps the name of this brave as an example of the bravery of the subclass and soldiers to take over the responsibilities of fallen or seriously wounded officers. During the bloody retreat from the Ferme Rembrandt to the Ferme Davout, the 21-year-old adjutant Dresse remarked that no more orders came through, that there were no more officers in the area, that the soldiers did not know where or what was done, that he was actually the highest in rank. Near the Bultekot ("Bell Farm") he took the lead and rushed at the head of a group of troops ahead to attack and attack a German machine gun nest on the road to the Ferme Davout.
The operation succeeded, but he himself did not get any more, a bullet hit him deadly ... War volunteer Charles Dresse, son of an industrialist from Verviers, later got a worthy monument at the place where he was killed, one of the few that was set up for an individual . His remains are buried at the Belgian military cemetery of West Vleteren.

Source: From the forest to Roeselare (final offensive 1918) by Robert Baccarne and Jan Steen. 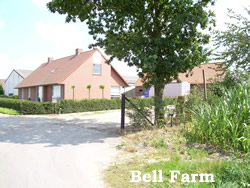 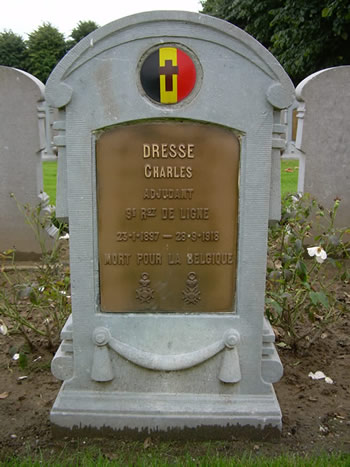 On his monument in Poelkapelle is written in Dutch (of that time!):

In the glorious memory of Charles Dresse
Born in Liège on January 23, 1897
War volunteer of 1914.
Adjudant to the 9th Regiment Voetvolk.
Struck by the enemy, he fell on this place on September 28, 1918.
After sacrificing his life for the freedom of the fatherland.
Pray for him. 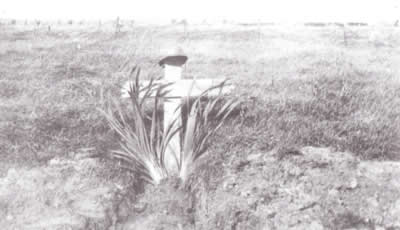 This is the tomb of Dresse when he was buried in September 1918. To be reburied later in West Vleteren. (he was buried somewhere in the field behind the monument)

1914:
25 Dec .: From home in SPA, left and to border
28thc .: Offered at the Belgian consulate in Maastricht as a war volunteer and candidate assistant officer.

1915:
05Jan .: Arrived in the center of the anciek military in fécamp (Seine-maritime) Registered with the 14th line regiment, no. 7817. Training in ISIGNY (Calvador final) Dependent of C.I. No. 8 (in carentan).
28th May: Promoted to Corporal. Training as an intructurer, in bayeux? (calvador)
17May: Promoted to sergeant. Instructor in C.I.A.M. in Fécamp?

1916:
Jan. 17: Promoted to adjutant
March: training C.I. the Mitrailleurs, in Criel-Sur-Mer.
16 am: Quarterly arrest (8d): left the quarters prematurely.
29rd: Room arrest (8d): was not where he had to be.
02 May: Prison (8d): nevertheless had left the quarter in the evening and had returned only in the morning. (was unwilling to go to the front.)
08 May: transferred to the battle order of the 9th Line regiment, in the same 3rd league division.
09 May: Arrived at the 9th Line Regiment, at the front.
Aug. 29: Promoted to Corporal.
16nov .: Leave (7d) with pay, with family in Paris?

9th Line Regiment i.v. Adjt Dresse:
Front service from May 21, 1916, in 3rd Army vision:
1) With 1st mixed Brigade in setor Diksmuide, i.e. Kaaskerke until December 1916.
2) With 9th infantry brigade (new name by reorganization) in sector Diksmuide (Kaaskerke) -Nieuwkapelle, then in sector Diksmuide (Kaaskerke) until Feb.
3) Rest in the Panne, from 23 Feb. 1917
4) With the same Infantry Brigade in the Ramskapelle-Pervyze sector, from 19 March, from the 20th of June, at the time of Oud Stuivekenskerke.
5) Rest with reorganization from 19 December 1917
6) With new formed 3rd infantry division in zone Merkem (after conquest in autumn 1917) from 13 Feb.1918. There battle with Merkem on April 17, 1918 with many losses for 9th line
7) Rest (after battle) from 09 May.
8) With the same Inf. Div. in zone Ramskapelle-Pervyze-Old Stuiv. from May 22, from August without Oudstuivekenskerke.
9) Rest in region Izenberge-Stavele-Hondschoote, from August 19.
10) Preparation and deployment for offensive, with attack grouping CENTER, i.e. reinforced 3rd Army Division, e.g. LtGen. J. Jalques.
Final offensive from 28 September 1918:
1) Left west from Mangelare-Langemark, each regiment 500m wide, three battalions behind each other, starting at 5.30 am.
2) Attack by German positions, always south of Bos van Houthulst, by the Waldriegel (Vijfwegen-Westrozebeke) in the direction of Stadenberg.
3) At 10 o'clock: before battalion (2nd) with many losses to Waldriegel north of Watervlietbeek, follow battalions (3rd) had to 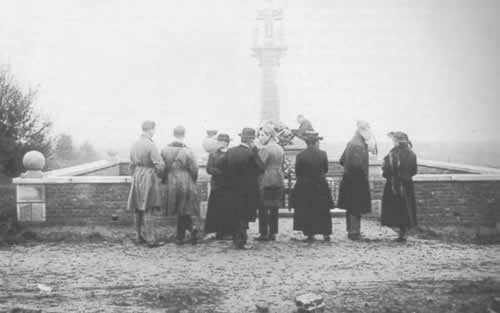 This picture was taken at the inauguration of the monument on Sept. 28. 1922
The father Van Charles Dresse lays a crown.
Present: Father and Mother and Brothers and other family members.

Advised Charles Dresse:
Father:
Edmond Marie Antoine Dresse (1870-1940)
- Industrial until 1907
- Owner of Manoir de Lébioles: castle with park, in Creppé in SPA
- Political prisoner in Tongeren: convicted after flight across the border of young men, up to 3 years of detention but after 7 months and sickness released with fine.
- After war (or even in war?) Consul of Dekenmarken in Liege.
- in 1929 (K.B. 15/101929) the honorable title écuyer (jonkheer) Dresse de lébioles (title still worn by one)

Mother:
Anne Marie Emelie Juliette Delloye (1870-1960)
- lived with family on "Manoir de lébioles"
- Political prisoner, with husband, also in Tongeren, sentenced to 2 years in custody, released after 40 days and illness on bail.
- Family was no longer allowed to go to the domain, it was too close to the German G.H.K. 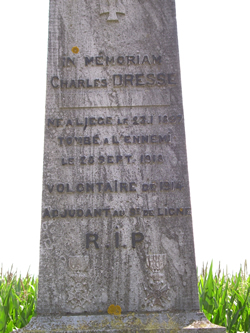