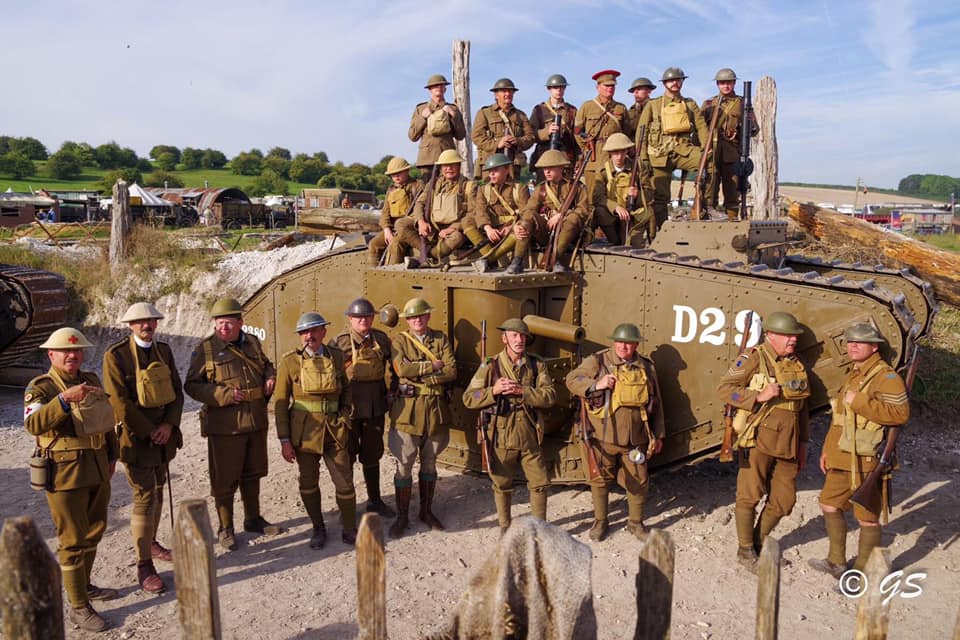 On July 21, 2018, we were invited to our National Day in Brussels, the theme was The First World War of course. Driving around there with our tank, ... one chance, 1 out of 1000! The condition was that the tank had to be finished as much as possible, but certainly had to be painted. Stijn started then the research witch colour our Damon 2 should have! Craig Moore is a Tank Historian at the Imperial War Museum of london where he could find proof of the colours, Steven Burvenich is a specialist in mixing with paints & Paint shop the Elephant eventually produced rock solid brown ship paint for us! A lot of research, but with the right contacts such a project is always possible. We cannot thank them enough of course, so thank you again !!

We always assumed that the tank colors were adjusted according to the environment at the front, that the tanks in the Somme were 1916 - green, Cambrai November 1917 - Dark brown and here in Flanders July 1917 were light brown. On every battlefield you had artists who tried to sketch the situation day by day on drawings, few soldiers succeeded, then surely not in colour? This is the report of Sergeant e. Claude Rowberry sketching the tanks in cambrai 1917! We are very pleased that the information from Craig Moore is correct and that the color of the tank matches the uniforms from The First World War.

Claude Rowberry was born in London on December 14, 1896 and died on June 10, 1962. He joined a cavalry regiment in 1914 and transferred to the Tank Corps when it was formed in 1917. He had no artistic training when he joined the army came. and came from a family with no artistic leanings. It was in Flanders that the compulsion to paint suddenly happened to him in response to the terrible massacre of man and nature that he saw happening around him in the Flemish mud. While on leave in London, he spent all his savings on artist materials and took them back to France. Back at the front he mastered the difficult problem, where tank colorsSource IWM, Craig Moore Even very few of the official war artists managed to make quick sketches on the battlefield. His commander had a 'fatherly' interest in him, apologizing during rest times so he could make his way to the front, attach himself to a unit, set up a makeshift donkey and sketch furiously, oblivious to the dangers that surrounded it. him.

His work amid the devastation was not a series of impressions that would later be "processed" into images, but completed works of art; most of his World War I paintings were painted on the battlefields. It was while with D Squadron in the tank battles around Cambrai, particularly around the village of Flesquieres in November 1917, that he was able to produce what should be considered unique historical records of his squadron's knockout tanks. He had almost an pathological fear that someone would see his work and he always hid his drawings away. Rowberry received his Military Medal for bravery and devotion to duty on March 26, 1918 near Bray. After his death, these works of art surfaced, as well as the evidence that the Mkiv tanks were Brown.

Steven Burvenich - Drab It yourself!