“Poelkapelle or Poelcapelle is a village that was noticed in the west of Europe because of the First World War. When it didn’t exist anymore. Obviously, Poelcapelle wasn’t the only village that ‘disappeared’, but of all the destroyed villages in the Ypres Salient, Poelcapelle was the most damaged according to the war pictures. Passendale or Passchendaele is more notorious, but there you could find three rocks on each other, and not one in Poelcapelle. The only things you could find there in 1917, were brick dust and red mud. The village simply didn’t exist anymore, but was invisible and untraceable, it returned to its original state of before the chapel: at the pool.”
These words were written decades ago, by Jan Steen and Robert Baccarne from Poelcapelle, because Poelcapelle during the First World War would never be forgotten. Now it’s our task and duty to follow their example and to help people remember what happened in Poelcapelle 90 years ago. Otherwise the suffering and the grief of the men who fought here would be useless! They fought in a war that would end all the wars! 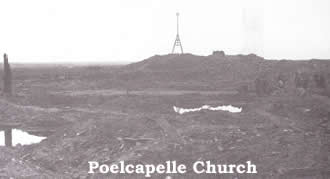 To remember what happened in the area of Poelcapelle, we started this website. You can see a lot of foto's and every piece of the village is described: the farms, the monuments and the (disappeared) cemeteries. A lot of regiments fought their courage out of them in Poelcapelle. A lot of reports of these battles can be found here. Charles Dresse was a young Belgian soldier who sacrificed his life for the freedom of his native country and his family gave him a monument at the spot where he fell in battle. The well-known legendary captain Georges Guynemer, who had 53 aerial victories, never returned after he ascended on the 11th of September in 1917. He died in Poelcaplle and he got the Guynemer Monument there. The biggest aeroplane in the First World War the German Zeppelin Staaken, crashed (21 April 1918) in our village of Poelcapelle. Shrapnel Charlie or Ivan Sinaeve also got a piece on this website because he helps us not to forget Poelcapelle: he makes little masterpieces of shrapnel balls which you can find on the battle fields. He wants to make just as much art works as names of the missing persons on the Menin Gate in Ypres. There was also a cemetery of tanks on the road between Poelcapelle and St-Julien. There is also a non-profit organization ‘Poelcapelle p1917 Associaton’, in honour of the First World War.