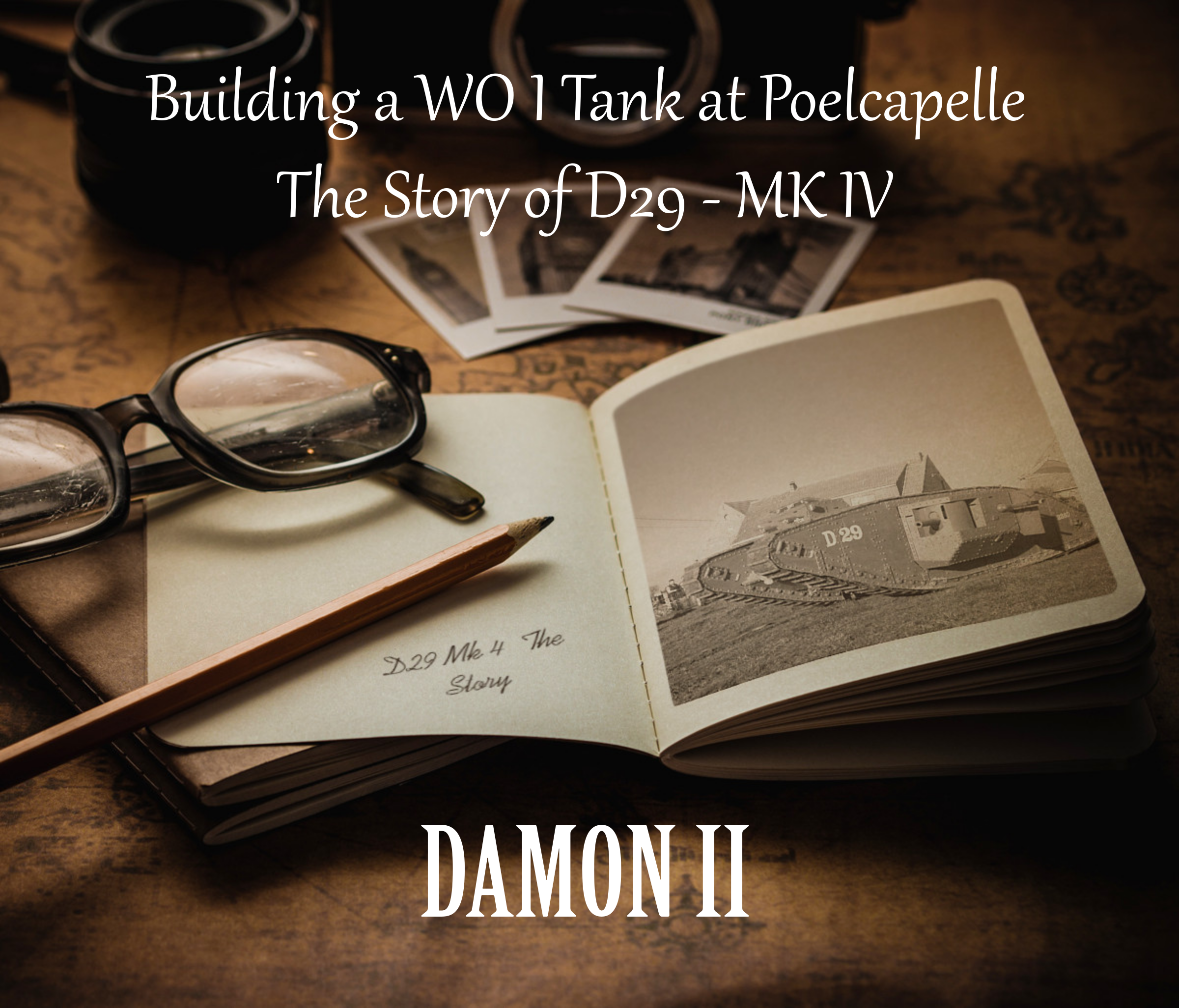 1914-1918: New, A tank!
Poelkapelle is today a quiet village between Ypres and Roeselare, where life goes its normal way. Something little suggests that this was completely different way in the nineties and

Poelkapelle was part of the world news several times. If you go to "Google" for a while, you will be refreshed for several hours with "Poelcapelle". Poelkapelle did not miss his appointment with history! World War I beat mercilessly in the period between 1914 and 1918: Poelkapelle disappeared from the map.

Despite the fact that Poelkapelle today apparently does not belong to the large front villages, it was like that in the past and with the arrival of the tank we hope that this will be the case again. At the start of the war in 1914, Poelkapelle was the last village on the road to Ypres that was no longer defended. The Germans occupied the village and in the spring of 1915, during the Student Battle, Poelkapelle was one large German stronghold on its way to Langemark. The struggle stagnated and both parties dug themselves in: a trench warfare had begun. In the slightly quieter year of 1916, the Germans built their infamous defense lines. The Bayern Stellung and the Flandern II Stellung ran through Poelkapelle.

Both parties had strengthened themselves and a merciless strike was announced. We write in the middle of 1917, the third battle for Ypres commenced and on 9 October the battle for Poelcapelle was delivered: Poelkapelle were swept off the map and in this mud pool the mythical French aviation hero Georges Guynemer collapsed on 11 September. Despite the fierceness of the struggle, it was again and again, as in the previous war years, a search for a breakthrough for both British and Germans. Human being was not enough for a long time and that is why more and more new techniques were being sought. Mitrailleurs, barbed wire, poison gas and flamethrowers were meanwhile commonplace, but this time the British, after earlier successes in Northern France, would unpack something completely new to the Ypres Salient: the tank! The most successful action with a tank in the Ypres Salient took place on the territory of Poelkapelle. In a landscape full of mud and crater pits, with a few main roads that were more or less visible and where only a few bunkers on the rubble of farms had remained intact, the tank had to ensure that, until then, the impregnable sites were conquered and that the number of victims in the attack could be drastically reduced.

However, most of these tanks did not reach their targets and remained hopelessly stuck in the mud and / or got hit hits. So between Sint-Juliaan and Poelkapelle, where now the Brugseweg is a trail of tank wrecks and even a real tank cemetery. There was even a tank in the middle of Poelkapelle, just before the current café de Zwaan! The tank of Poelcapelle!

A static dummy tank at the Lekkerboterbeek remembers it: 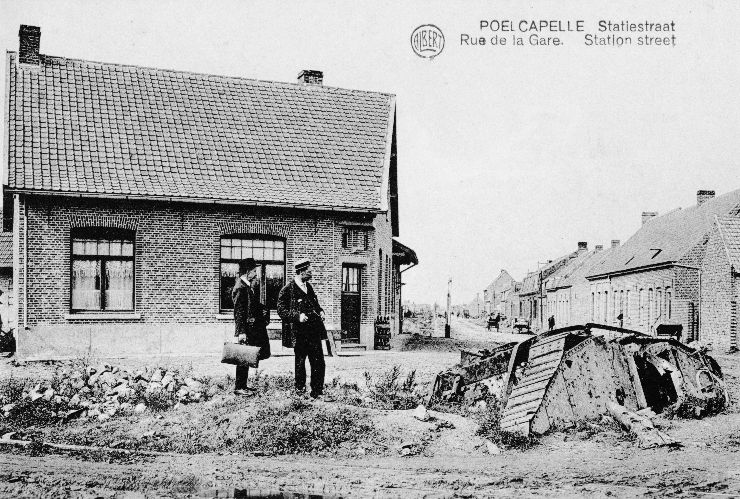 Poelkapelle was partly liberated in September / October 1917 by the British soldiers with, among other things, the help of these tanks. After the war a jammed and broken tank got stuck for a long time on the spot where later  the bar 'the Zwaan' came:

1917-1941: The tank of Poelkapelle:
After the war, a real pilgrimage to the battlefields around Ypres came from Great Britain. The tank cemeteries were also permanent stops for the war tourists. Numerous are the photos from then: everyone wanted a snapshot in or on one of the tank wrecks. However, around 1923, many tanks were cleared, for the returned local population the iron of the tanks, at sale, was a welcome extra income! Fortunately, a tank in Ypres and Poelkapelle was spared. Our tank of Poelkapelle, which was sunk at café de Zwaan, was towed to the market by the then mayor Nevejan, next to the Guynemermonument. This tank, which had been a sign of hope for many British soldiers, was rightly chosen by the inhabitants of Poelkapelle as a lasting memory of world war I. For the British soldiers, for whom the tank was a sign of hope, because it meant progress and saved many lives, there was no more beautiful tribute. Meanwhile, the tank had become an indispensable part of Poelkapelle, certainly not for the Poelkapel children who played "war" on it and around it, and sometimes earned some Pennies from British tourists to spend in the surrounding shops. Many of these children of yesteryear are grandfathers and grandmothers or some more and dream of their tank from their childhood when there were still many tourists Poelkapelle who helped rebuild and keep the village through their digestion. The tank was cleaned up when the Germans came a second time in 1941 ..., even then the metal was precious! Have a look here to a very rarer coloured Damon 2 pic!

Dudley White was killed when Damon was hit by a Shell, read more about him here! 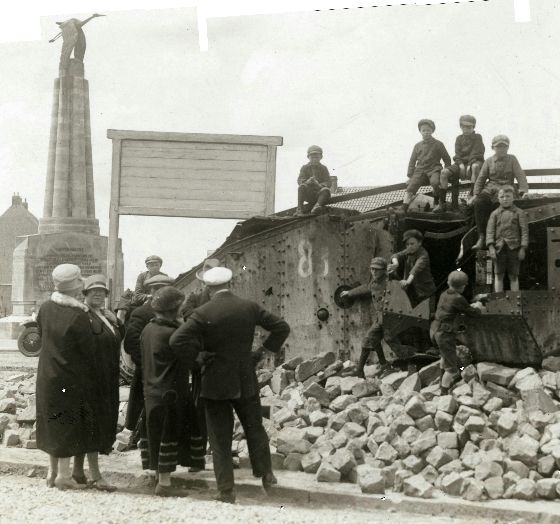 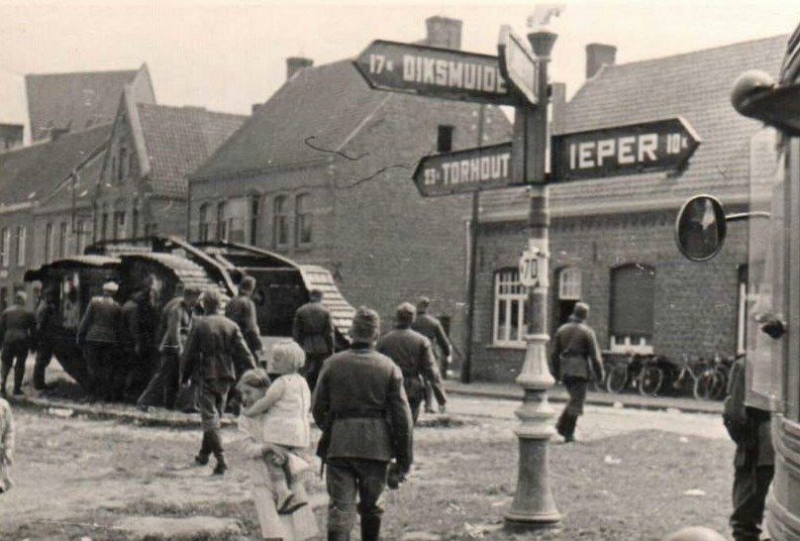 And so the tank got a bit forgotten. Only some postcards brought back memories from time to time.

After the Second World War and especially since 1967, Poelkapelle was put back on the tourist map with the Guynemer commemorations, but that was a purely French affair and only once a year. With the arrival of the "In Flanders Fields" museum in Ypres, in the last decade we saw a real revival of battlefield tourism. With the project "War and Peace", the province provided a coordinated approach, based on valuable war sites. This became Guynemer for Poelkapelle. In retrospect, Poelkapelle missed the boat: for Guynemer it remained at the five-yearly commemoration but the peace route (the former route 14-18) meanwhile, just before Poelkapelle, a loop around the village as if Poelkapelle would be less interesting and so but better to ignore. The fact that in Poelkapelle at the most important moment of its history there had been a tank on the market square had also been forgotten ...
2005- ...: A new tank for Poelkapelle: 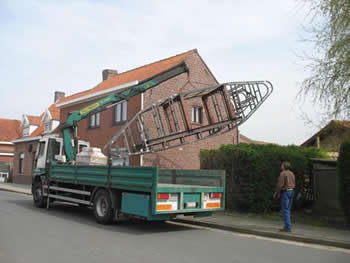 Just that tank now ensures that some Poelkapelle fans want to change this situation. The idea "whether it would not be possible to

give Poelkapelle his tank again" was discussed at a meeting of the former combatants association for three years. Everyone was enthusiastic and immediately a number of idealists jumped on the cart. From the start it was clear that we went for the big work. A tank, the same size and exactly resembling the original and in the village center of Poelkapelle. The Pennie children of that time ", now grandfathers and grandmothers from Poelkapelle, watched with great interest that the tank would really come! And yes, three years later, after this tank was first mentioned, the first phase of the project was completed and the Dummy tank came.

You can find our Driving Replica tank at  The Pondfarm (on appointment only!)

To make our dream come true, Johan Vanbeselaere bought a hydraulic excavator undercarriage in 2013 that we brought together with a new and stronger chassis, with the help of Vandaele Machinery (Hydraulic) and Herman Persyn (chassis welding) in 2016, where we also mounted the track shoes in the same year and immediately did a test on the field.

The tank was brought to the Pondfarm at the Butaye family in early 2017 for the total finishing! We then hoped to finish the plating against the Historical Tank Tour in October that same year, but with some problems we were already a big step further! The welding work was done by Luc Butaye and Herman Persyn.

2018 was the year of our National Day, Luc Butaye took on all the welding work for the rest of the plating, detail work, .... also we were all busy getting a painted tank ready, the engine was replaced with the help of Jcb UK and with good results!! But then we had problems with the Hydraulic system in Brussels ... followed by we could not participate in the Parade and yes so Johan, Stijn, Enrique had great stress getting the tank on the low loader every time, but it was in the end all worth it!

In 2019 we had permanent problems with the hydraulics, we had to cancel many events except Mons, when the Belgian army put in the last transport to get the tank (without engine) on the market of Mons. Until Hydrauvision came to the rescue (via Jurgen Vanecke & former Para Stephen Angliss from Hydrauvision) with a new Hydraulic System! The installation was done by Vervaeke, which now also results in a driving tank on remote control!

In the meantime we have already been with the tank to the National Fair in Brussels, Great Dorset Steam Fair in England, Tanks in Town in Mons and Cambrai! It would be the intention of P1917a to keep an annual tradition with this tank and to make a ride from Sint-Juliaan to Poelkapelle like the real Damon 2 once drove on the same route 100 years ago. We would also like to live up the great commemoration of the tank battle in Cambrai with the presence of our tank and this as a thank you for the help. In the future we hope to give the tank a safe place in Poelkapelle where tourists can visit it. For the moment you can visit our driving Replica tank at the Pondfarm, on appointment only.